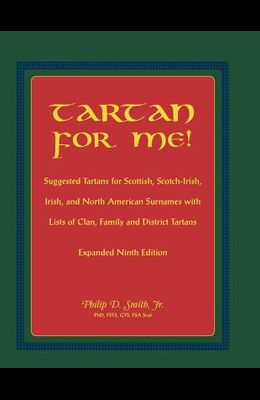 Tartan for Me! Suggested Tartans for Scottish, Scotch-Irish, Irish, and North American Surnames with Lists of Clan, Family, and District Tartans. Expa

This ninth edition of Tartan For Me presents the latest in a series of tools for the person seeking or giving information on the selection of a tartan appropriate to a given surname. The lists of clan, family and district tartans are as current as can be. The master Tartan-Name list has been revised and expanded by adding thousands of Scottish, Cornish, Welsh, Manx, Irish and non-Celtic surnames. Tartan is a living textile art form with a tradition that began in the Highlands of Scotland about the same time that Europeans discovered both their own minority cultures and the New World. Over the centuries the Pride o' Tartan has grown while the exodus of Scots and Ulster Scots to new homes continues even today. Millions throughout the world look to Scotland, Ireland or other Celtic areas as their point of cultural heritage. Tartan is the living, visible symbol of this identification. Every Scot is color coded. Recently, tartan has become a more universal symbol than purely Scottish. It has become synonymous with identification throughout the world. Tartan is used as corporate logos, by schools and universities, as well as football teams. Personal family tartans abound from Canada to Japan. Although not long associated with the tradition, tartans are now being designed for Irish, Cornish, Manx, Welsh and a variety of non-Celtic surnames and regions. English counties and other Celtic and non-Celtic areas of Europe, America and even China, Russia, and Japan now have national or regional tartans. Four maps supplement the text: a map of district tartan areas, a map of Irish districts, a map of Irish counties, and a map showing the approximate locations of major clans. Information is included on how to locate uncommon tartans, the meaning of color, the recording of tartans, and when to wear a tartan. Surnames are arranged alphabetically, providing quick reference to the right tartan for you.

Books similiar to Tartan for Me! Suggested Tartans for Scottish, Scotch-Irish, Irish, and North American Surnames with Lists of Clan, Family, and District Tartans. Expa

List of All Editions of Tartan for Me! Suggested Tartans for Scottish, Scotch-Irish, Irish, and North American Surnames with Lists of Clan, Family, and District Tartans. Expa