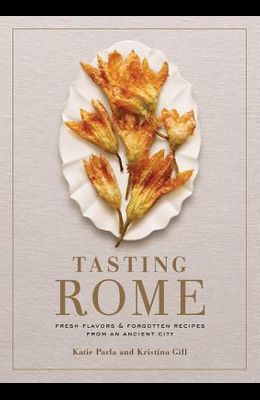 by
Katie Parla and Kristina Gill and Mario Batali

A love letter from two Americans to their adopted city, Tasting Rome is a showcase of modern dishes influenced by tradition, as well as the rich culture of their surroundings. Even 150 years after unification, Italy is still a divided nation where individual regions are defined by their local cuisine. Each is a mirror of its city's culture, history, and geography. But cucina romana is the country's greatest standout. Tasting Rome provides a complete picture of a place that many love, but few know completely. In sharing Rome's celebrated dishes, street food innovations, and forgotten recipes, journalist Katie Parla and photographer Kristina Gill capture its unique character and reveal its truly evolved food culture--a culmination of 2000 years of history. Their recipes acknowledge the foundations of Roman cuisine and demonstrate how it has transitioned to the variations found today. You'll delight in the expected classics (cacio e pepe, pollo alla romana, fiore di zucca); the fascinating but largely undocumented Sephardic Jewish cuisine (hraimi con couscous, brodo di pesce, pizzarelle); the authentic and tasty offal (guanciale, simmenthal di coda, insalata di nervitti); and so much more. Studded with narrative features that capture the city's history and gorgeous photography that highlights both the food and its hidden city, you'll feel immediately inspired to start tasting Rome in your own kitchen.