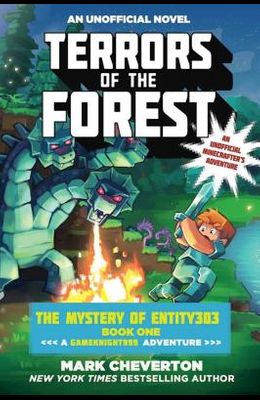 Terrors of the Forest: The Mystery of Entity303 Book One: A Gameknight999 Adventure: An Unofficial Minecrafter's Adventure

New York Times Bestselling Author The world of Minecraft comes to life in this thrilling original adventure Gameknight999 reenters Minecraft to find it completely changed. There are new monsters that he's never seen before: giants and skeleton druids and pinch beetles and king spiders and mistwolves. Villages are larger than ever, and more heavily fortified; Minecraft had become much more dangerous. Even the very trees had changed, with some of them reaching up taller than the User-that-is-not-a-user ever thought was imaginable. There's a diamond block portal outside of Crafter's village, and rumors are spreading that a strange user was seen coming out of the portal with a young boy, before they disappeared into another portal, leaving behind a square hole one block deep with a ring of flowers around it. Gameknight recognizes it as the portal to reach the Twilight Forest mod. But how can there be mods here in the vanilla Minecraft? The User-that-is-not-a-user follows the trail and finds odd mentions of 303 and White Castle. But what do the clues mean? Just how dangerous is this new user to Minecraft, and where is he taking the young NPC? Only Gameknight999 will be able to find out.

Books like Terrors of the Forest: The Mystery of Entity303 Book One: A Gameknight999 Adventure: An Unofficial Minecrafter's Adventure

List of All Editions of Terrors of the Forest: The Mystery of Entity303 Book One: A Gameknight999 Adventure: An Unofficial Minecrafter's Adventure