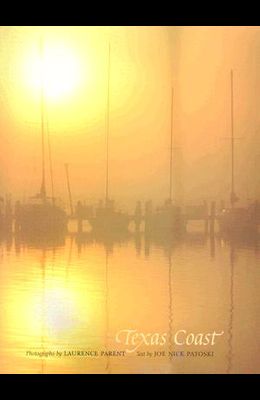 The Texas coast attracts everyone--children playing in the surf and building sand castles; high school and college students partying at spring break; adults easing workaday stresses by beachcombing, birding, fishing, or just watching the waves roll in one after another. In the coast's elemental landscape of low dunes, sandy beaches, salt water, and sea breezes, life itself seems simpler. There's time to watch the seagulls fighting over a fish, bodysurf in the waves, pick up shells on the beach, and reconnect with the healing rhythms of nature. This beautiful book combines Laurence Parent's magnificent photographs with Joe Nick Patoski's entertaining text to create a one-of-a-kind portrait of the Texas coast. Parent's images capture Texas beaches, bays, estuaries, and salt marshes from Sabine Pass near the Louisiana border to Boca Chica, where the Rio Grande (sometimes) enters the Gulf of Mexico. He records all the familiar and distinctive scenes--sunrise over the Gulf of Mexico and sunset over the bays, sand dunes covered in goat-foot morning glories, historic lighthouses, shrimp boats and sailboats in harbor, and our favorite destinations of Galveston, Port Aransas, Corpus Christi, and South Padre Island. He also highlights lovely, lesser-known places you may not have discovered yet, such as Brazos Bend State Park. Joe Nick Patoski takes you on a verbal tour of the Texas coast. He describes the irresistible allure of this undramatic yet somehow unforgettable chain of barrier islands and bays. He also acknowledges the human activity that has always been a part of the coastal story--the arrival of immigrants to settle Texas; Civil War battles at Sabine Pass, Galveston, and Palmetto Ranch; towns, such as Indianola, that flourished and then suddenly folded after devastating hurricanes; the building of a huge petrochemical industry; and the successful effort to create wildlife refuges to sustain migrating birds and endangered species such as whooping cranes and Kemp's ridley sea turtles. Together, Parent and Patoski make it plain why people return to the coast as regularly as waves lap the beach. Looking through Texas Coast may well be where your next visit begins.