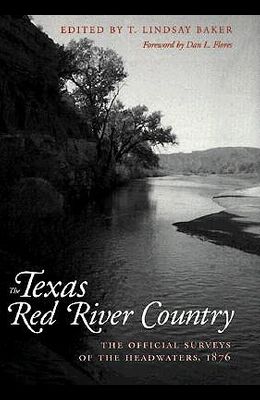 Texas Red River Country: The Official Surveys of the Headwaters, 1876

by
and T Lindsay Baker and Dan L Flores

In May, 1876, a party of army engineers, teamsters, and a civilian draftsman with a military escort departed from Fort Elliott in the Texas Panhandle to conduct a topographic and scientific survey and to explore the headwaters of the Red River. Their reports of the land, water resources, insects, plants, birds, and geology of the central Panhandle were printed in a government document the next year but were little known for a hundred years. First Lieutenant Ernest Howard Ruffner was responsible for the exploration--both its conception and its execution. Ruffner began his work at Fort Elliott and, accompanied by a large military escort and civilian scouts, conducted a stadia line survey from there to the canyon now known as the Palo Duro, then on to the main head of the river at Tierra Blanca and Palo Duro Creeks. Seventeen detailed maps recorded the party's route and the country through which it passed. Among the surveying party was a civilian draftsman of German origin, Adolph Hunnius, who kept a diary detailing the daily activities of the expedition. In 1985 T. Lindsay Baker edited the diary and the manuscript of the official report from the National Archives and published them for a limited readership as a special issue of the Panhandle-Plains Historical Review. Baker wrote: The official report and the Hunnius diary are remarkable documents not only for the history of the Texas Panhandle but also for the history of scientific investigations in the American West. Not included in the 1985 publication was the survey party's ornithological report, written by Charles A. H. McCauley, which Baker subsequently found and published in 1988 as an article in the Panhandle-Plains Review, including ornithological annotation by Kenneth D. Seyffert, former president of the Texas Audubon Society. The two parts of the report have never before appeared under cover together. Now they do, in this revised edition with a new introduction, which focuses on the reports as environmental history. Dan L. Flores's knowledgeable foreword to the work further strengthens the environmental history contribution.