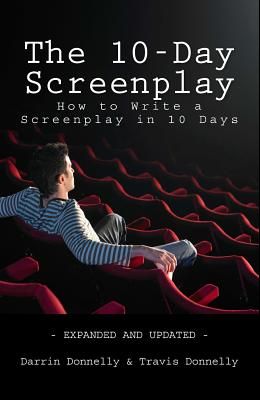 The 10-Day Screenplay: How to Write a Screenplay in 10 Days

The Step-By-Step Course That Shows You How to Write Your Screenplay in Just 10 Days If you want to write screenplays for a living, there is nothing more valuable for a writer than being able to produce a quality screenplay quickly. We created this course to give you all the tools you need to accomplish exactly that. Our promise is simple: follow this system and in 10 days, you'll have a powerful script finished - Travis Donnelly, writer, Medium and Hawaii Five-O Some of the most famous movies in history were written in 10 days or less. Sylvester Stallone wrote Rocky in just three days. The movie became one of the most successful of all time and made Stallone an international superstar. Kevin Williamson wrote Scream in four days. The script created a hot bidding war and made Williamson one of the highest-paid screenwriters in Hollywood. John Hughes, one of the most successful screenwriters ever wrote National Lampoon's Vacation in seven days, Ferris Bueller's Day Off in four days, Planes, Trains, and Automobiles in three days, and The Breakfast Club in just two days. Joe Eszterhas wrote Basic Instinct in 10 days. When he was finished, he shipped the script to his agent and sold it three days later for $3 million. Not only is it possible to write a great screenplay in 10 days or less, but spending too much time on a script is actually one of the worst mistakes a screenwriter can make It can lead to boring, dull, and unoriginal scripts. Stop wasting so much time and energy trying to write your next screenplay. Simply follow this program and in as little as 10 days, you'll finish a screenplay that could launch your writing career The 10-Day Screenplay system works like this: STEP 1: The 10-Day Screenplay shows you how to evaluate your initial idea using the five requirements of every great movie idea. Is your idea unique? Is it big enough? Will it make for a compelling two-hour movie? What can be done to make your idea bigger and better? STEP 2: The 10-Day Screenplay system forces you to flesh out your characters. Great characters make great movies. You need to really know your characters and let THEM dictate your plot, NOT the other way around. Amateur screenwriters come up with a plot and then plug in forced characters to play it out. This is a huge mistake STEP 3: Once you have your idea and your characters, it's time to write your script following The 10-Day Screenplay course. Each day of the course includes an important lesson on what your story objective should be for that day along with a manageable writing assignment. If you simply follow this course, at the end of the 10 days, you will have a finished script To make this process easy to understand, The 10-Day Screenplay breaks down 10 blockbuster movies along the way - Rocky , Braveheart , Home Alone , My Big Fat Greek Wedding , There's Something About Mary , Bridesmaids , Toy Story , Back to the Future , Die Hard , and Scream . You'll see how plot and character objectives worked in each movie and how they can be applied to your screenplay. It's time to stop dreaming and start writing This book will show you the way. The 10-Day Screenplay: How to Write a Screenplay in 10 Days is an invaluable tool. I used it to write my first screenplay (which resulted in a South by Southwest World Premiere feature film), and I continue to use it today. It provided me with an accessible entry-point into the world of succinct storytelling. I could not have made my first feature film without it and I highly recommend this book to everyone - Katharine Emmer, writer and director, Life in Color