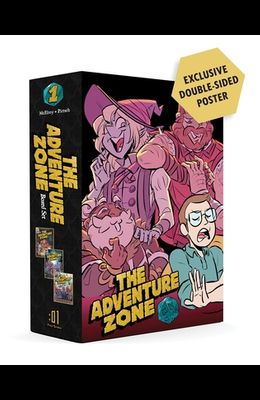 The Adventure Zone Boxed Set: Here There Be Gerblins, Murder on the Rockport Limited! and Petals to the Metal

Come along on a wildly entertaining adventure to battle some Gerblins, solve a murder on a train, and race like your life depends on it Just try not to die, seriously. This deluxe boxed set includes the paperback editions of the first three volumes of the New York Times --bestselling Adventure Zone graphic novel series, based on The Adventure Zone , a tabletop RPG comedy podcast with downloads numbering in the tens of millions and an army of passionately devoted fans. With art and co-adaptation from Carey Pietsch, the McElroys are turning their raucous freewheeling D&D campaign into some damn fine comics.