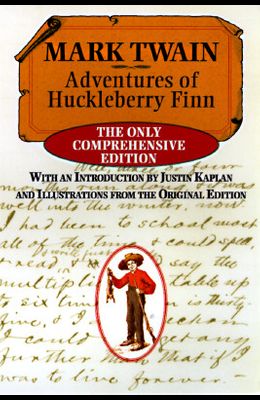 Book #2 in the Adventures of Tom and Huck Series
by
Mark Twain
$4.47
Select Format

The recent discovery of the first half of Mark Twain's manuscript of Adventures of Huckleberry Finn, long thought lost, was a monumental literary coup and an international news story. This landmark edition, which contains additions episodes and variations from the first half of the handwritten manuscript, as well as facsimile reproductions of 30 manuscript pages, is destined to become the definitive version of this essential American classic.

From the front Cover A GOLD MINE FOR SCHOLARS. *Deidre Carmody The New York Times Now, in this extraordinary literary discovery, the original first half of Mark Twain's American masterpiece is available for the first time ever to a general readership. Lost for more than a century, the passages reinstated in this edition reveal a novel even more controversial than the version Twain published in 1885, and provide an invaluable insight into his creative process. The changes that Mark Twain made indicate that he frequently checked his impulse to write an even darker, more confrontational work than the book he finally published. Even in its smallest variations, the original manuscript demonstrates the skill, the restraint, and the constraints that affected Mark Twain's thinking. This edition, then, not only presents the Huckleberry Finn that has delighted and provoked readers everywhere for more than a century, but also brings forward the original book behind the book. A breakthrough of unparalleled impact, this comprehensive edition of an American classic is the final rebuttal in the tireless debate of what Mark Twain really meant. [A] masterly restoration . . . I wish this new version of Huckleberry Finn would be distributed to all the nation's classrooms as the basic text and lead to a badly needed reconsideration of the questions it raises. *James A. McPherson Chicago Tribune Thoughtfully respects Twain's intentions. *Gary Lee Stronum The Cleveland Plain Dealer With a foreword and addendum by Victor Doyno