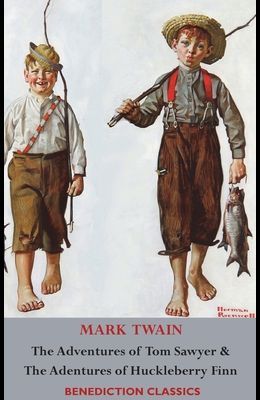 Part of the I Survived Series
by
Mark Twain

Tom Sawyer is an intelligent resourceful orphan who enjoys a life of freedom that is unsheltered from life's hardships. He is an immediately attractive character who draws the reader through his adventures. Huck Finn is more superstitious and na ve, but still an adventurous survivor. Together they engage with their world in this classic coming of age story. What makes these two books classics? Twain's characters are surprising, unforgettable and truly human. The dialog faithfully reproduces the common speech of his day. Twain explains, In this book a number of dialects are used, to wit: the Missouri negro dialect; the extremest form of the backwoods Southwestern dialect; the ordinary 'Pike County' dialect; and four modified varieties of this last. The shadings have not been done in a haphazard fashion, or by guesswork; but painstakingly, and with the trustworthy guidance and support of personal familiarity with these several forms of speech. The plot combines adventure, suspense and mischief with the darker side of humanity: murder, deceit, brutality and racial prejudice. Twain's trademark humor and observations of human nature are never far. Hemingway concludes All modern American literature comes from one book by Mark Twain called Huckleberry Finn . . . It is the best book we have. Features of this edition: Complete and unabridged Includes 335 original illustrations Crisp text set in modern easily read font.

I Survived Series In Order - By Mark Twain