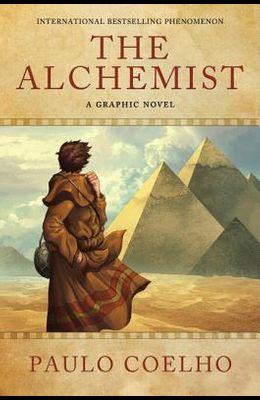 The Alchemist: A Graphic Novel

The Alchemist by Paulo Coelho continues to change the lives of its readers forever. With more than two million copies sold around the world, The Alchemist has established itself as a modern classic, universally admired. Paulo Coelho's masterpiece tells the magical story of Santiago, an Andalusian shepherd boy who yearns to travel in search of a worldly treasure as extravagant as any ever found. The story of the treasures Santiago finds along the way teaches us, as only a few stories can, about the essential wisdom of listening to our hearts, learning to read the omens strewn along life's path, and, above all, following our dreams. Acclaimed illustrator Daniel Sampere brings Paulo Coelho's classic to new life in this gorgeously illustrated graphic novel adaptation.

From the Back Cover Andalusian shepherd boy Santiago travels from his homeland in Spain to the Egyptian desert in search of a treasure buried in the Pyramids. Along the way he meets a Gypsy woman, a man who calls himself king, and an alchemist, all of whom point Santiago in the direction of his quest. No one knows what the treasure is, or if Santiago will be able to surmount the obstacles along the way. But what starts out as a journey to find worldly goods turns into a discovery of the treasure found within. Since its first printing The Alchemist has been translated into seventy-one languages and sold forty million copies worldwide, establishing itself as a modern classic that will enchant and inspire readers for generations to come. Beautifully rendered, The Alchemist: A Graphic Novel is a must have for any collector's library. Acclaimed illustrator Daniel Sampere brings Paulo Coelho's classic to new life in this gorgeously illustrated graphic novel adaptation.