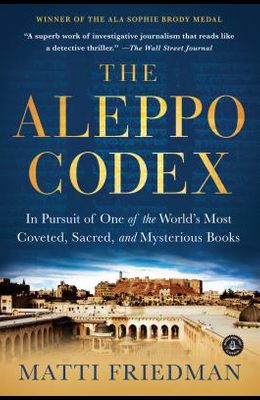 The Aleppo Codex: In Pursuit of One of the World's Most Coveted, Sacred, and Mysterious Books

Winner of the 2014 Sami Rohr Prize for Jewish Literature A thousand years ago, the most perfect copy of the Hebrew Bible was written. It was kept safe through one upheaval after another in the Middle East, and by the 1940s it was housed in a dark grotto in Aleppo, Syria, and had become known around the world as the Aleppo Codex. Journalist Matti Friedman's true-life detective story traces how this precious manuscript was smuggled from its hiding place in Syria into the newly founded state of Israel and how and why many of its most sacred and valuable pages went missing. It's a tale that involves grizzled secret agents, pious clergymen, shrewd antiquities collectors, and highly placed national figures who, as it turns out, would do anything to get their hands on an ancient, decaying book. What it reveals are uncomfortable truths about greed, state cover-ups, and the fascinating role of historical treasures in creating a national identity.