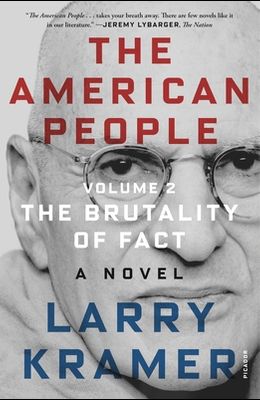 The American People: Volume 2: The Brutality of Fact: A Novel

In The American People: Volume 2: The Brutality of Fact , Larry Kramer completes his radical reimagining of his country's history. Ranging from the brothels of 1950s Washington, D.C., to the activism of the 1980s and beyond, Kramer offers an elaborate phantasmagoria of bigoted conspiracists in the halls of power and ordinary individuals suffering their consequences. With wit and bite, Kramer explores (among other things) the sex lives of every recent president; the complicated behavior of America's two greatest spies, J. Edgar Hoover and James Jesus Angleton; the rise of Sexopolis , the country's favorite magazine; and the genocidal activities of every branch of our health-care and drug-delivery systems. The American People: Volume 2 is narrated by (among others) the writer Fred Lemish and his two friends--Dr. Daniel Jerusalem, who works for America's preeminent health-care institution, and his twin brother, David Jerusalem, a survivor of a Nazi concentration camp who was abused by many powerful men. Together they track a terrible plague that intensifies as the government ignores it and depict the bold and imaginative activists who set out to shock the nation's conscience. In Kramer's telling, the United States is dedicated to the proposition that very few men are created equal, and those who love other men may be destined for death. Here is a historical novel like no other--satiric and impassioned and driven by an uncompromising moral and literary vision.

List of All Editions of The American People: Volume 2: The Brutality of Fact: A Novel