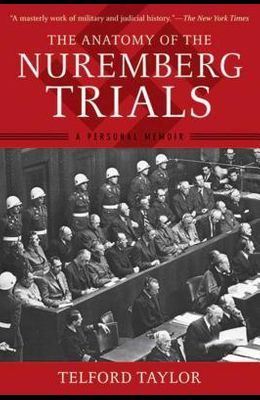 The Anatomy of the Nuremberg Trials: A Personal Memoir

In 1945, the Allied nations agreed on a judicial process, rather than summary execution, to determine the fate of the Nazis following the end of World War II. Held in Nuremberg, the ceremonial birthplace of the Nazi Party, the British, American, French, and Soviet leaders contributed both judges and prosecutors to the series of trials that would prosecute some of the most prominent politicians, military leaders and businessmen in Nazi Germany. This is the definitive history of the Nuremberg crimes trials by one of the key participants, Telford Taylor, the distinguished lawyer who was a member of the American prosecution staff and eventually became chief counsel. In vivid detail, Taylor portrays the unfolding events as he saw, heard, and otherwise sensed them at the time, and not as a detached historian working from the documents might picture them. Taylor describes personal vendettas among the Allied representatives and the negotiations that preceded the handing down of sentences. The revelations have not lost their power over the decades: The chamber is reduced to silence when an SS officer recounts impassively that his troops rounded up and killed 90,000 Jews, and panic overcomes the head of the German State Bank as it becomes clear that he knew his institution was receiving jewels and other valuables taken from the bodies of concentration camp inmates. The Anatomy of the Nuremberg Trials has proven to be a defining piece of World War II literature, an engrossing and reflective eyewitness account of one of the most significant events of our century.

Books like The Anatomy of the Nuremberg Trials: A Personal Memoir

List of All Editions of The Anatomy of the Nuremberg Trials: A Personal Memoir