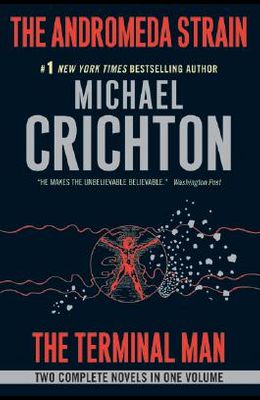 #1 New York Times bestselling author Michael Crichton has been called one of the great storytellers of our age, * a master at seamlessly blending cutting-edge science and technology with spellbinding adventure. Now two of his most electrifying thrillers have been combined in one volume, to astonish and terrify a new generation of readers with brilliant and disturbing visions of the frighteningly possible. The Andromeda Strain A satellite sent into the outer fringes of space to collect organisms and dust for study falls back to earth, crash-landing in a desolate area of Arizona, twelve miles from the tiny town of Piedmont. The terror has begun . . . The Terminal Man The brain of a patient prone to violent, uncontrollable seizures has been implanted with experimental electrodes designed to soothe his homicidal impulses. But the doctors never dreamed he'd learn to control the monitor inside his head. Now an unstoppable maniac is loose in an unsuspecting city