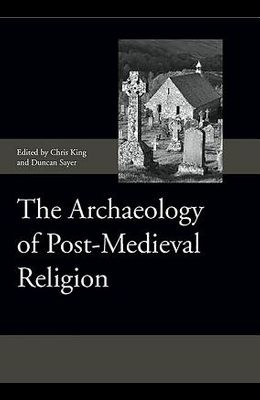 The Archaeology of Post-Medieval Religion

The post-medieval period was one of profound religious and cultural change, of sometimes violent religious conflict and of a dramatic growth in religious pluralism. The essays collected here, in what is the first book to focus onthe material evidence, demonstrate the significant contribution that archaeology can make to a deeper understanding of religion. They take a broad interdisciplinary approach to the spatial and material context of religious life, using buildings and landscapes, religious objects and excavated cemeteries, alongside cartographic and documentary sources, to reveal the complexity of religious practices and identities in varied regions of post-medieval Britain, Europe and the wider world. Topics covered include the transformation of religious buildings and landscapes in the centuries after the European Reformation, the role of religious minorities and immigrant groups in early modern cities, the architectural and landscape context of eighteenth and nineteenth-century nonconformity, and the development of post-medieval burial practices and funerary customs. Offering a unique perspective on the material remains ofthe post-medieval period, this volume will be of significant value to archaeologists and historians interested in the religious and cultural transformation of the early modern world. Contributors: Chris King, Duncan Sayer, Andrew Spicer, Philippa Woodcock, Matthias Range, Simon Roffey, Greig Parker, Jeremy Lake, Eric Berry, Peter Herring, Claire Strachan, Peter Benes, Diana Mahoney-Swales, Richard O'Neill, Hugh Willmott, Natasha Powers, Adrian Miles, Anwen Cedifor Caffell, Rachel Clarke, Rosie Morri

List of All Editions of The Archaeology of Post-Medieval Religion