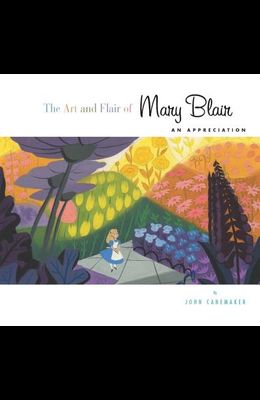 The Art and Flair of Mary Blair: An Appreciation

by
John Canemaker and Mary Blair

For more than a dozen years, a soft spoken, unassuming woman dominated design at The Walt Disney Studios with a joyful creativity and exuberant color palette that stamped the look of many classic Disney animated features, including Cinderella and Peter Pan . Favorite theme park attractions, most notably the It's A Small World boat ride, originally created for the 1964-1965 New York World's Fair, were also among her designs. Now the story behind one of Walt's favorite artists is celebrated in this delightful volume of whimsical art and insightful commentary. In her prime, Mary Blair was an amazingly prolific American artist who enlivened and influenced the not-so-small worlds of film, print, theme parks, architectural decor, and advertising. Her art represented and communicated pure pleasure to the viewer. Mary Blair's personal flair was at one with the imagery that flowed effortlessly and continually from her brush for more than half a century. Walt Disney loved her art and championed it at the Studio. The two shared many sensibilities, including a childlike fondness for playfulness in imagery. Searching for that perfect gift for the animation fan in your life? Explore more behind-the-scenes stories from Disney Editions: The Art of Mulan: A Disney Editions Classic Walt Disney's Ultimate Inventor: The Genius of Ub Iwerks One Day at Disney: Meet the People Who Make the Magic Across the Globe The Walt Disney Studios: A Lot to Remember From All of Us to All of You: The Disney Christmas Card Ink & Paint: The Women of Walt Disney's Animation Oswald the Lucky Rabbit: The Search for the Lost Disney Cartoons, Revised Special Edition Disney Villains: Delightfully Evil - The Creation, The Inspiration, The Fascination Illusion of Life: Disney Animation (By Disney Legends Frank Thomas and Ollie Johnston)