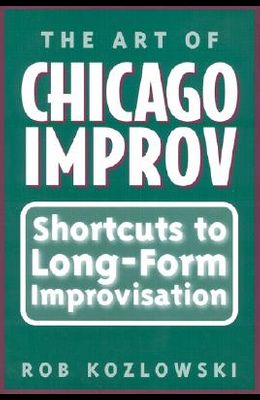 The Art of Chicago Improv: Short Cuts to Long-Form Improvisation

Improvisational theatre revolutionized American comedy and Chicago was its home. That city not only nurtured so much of the best work done; it also spawned many different styles that traveled around the country and the world. Experienced improv artist Rob Kozlowski trained at Chicago's Second City and knows firsthand what improv really is and what it can achieve. He tells all in this account of the first 50 years of the Chicago improv scene. Kozlowski traces the history of improvisational acting in Chicago from the days of Viola Spolin to the appearance of the Compass, Second City, and today's practitioners. In between, he takes a detailed look at Charna Halpern and the ImprovOlympic revolution, Del Close and the development of a long-form improvisation called the Harold, and all that followed. Kozlowski also provides a guide to improv troupes seeking a style that's just right for them, with detailed descriptions of specific productions and discussions of the implications of pursuing certain improv techniques. His interviews with Annoyance Theater founder Mick Napier, ImprovOlympic veteran Noah Gregoropoulos, and ImprovOlympic's Training Center Director Liz Allen reveal the challenges and joys of long-form improvisation and how aspiring improv artists can get involved. Whether you're an SNL wannabe, a student of improv history, or fan of the art form, this resource will enlighten you about the workings of America's comedy capital.