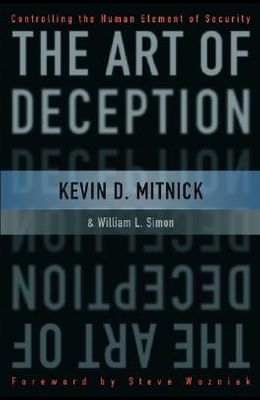 The Art of Deception: Controlling the Human Element of Security

by
Kevin D Mitnick and Phil Simon and Steve Wozniak

This book builds on the foundation of Bruce Schneier's book Secrets & Lies. Mitnick claims that computer security is more than just hardware and software--it lies with the company's own employees.

From the Back Cover The world's most celebrated hacker delivers the lowdown on today's most serious security weakness-human nature Finally someone is on to the real cause of data security breaches-stupid humans ... Mitnick ... reveals clever tricks of the 'social engineering' trade and shows how to fend them off. -Stephen Manes, Forbes A tour de force, a series of tales of how some old-fashioned blarney and high-tech skills can pry any information from anyone. As entertainment, it's like reading the climaxes of a dozen complex thrillers, one after the other. -Publishers Weekly Mitnick provides hair-raising examples of social engineering-disgruntled employees stealing top-secret research, smooth-talking con men acquiring data on next-generation explosives for terrorists-and explains how to combat it. -Angela Gunn, Time Out New York He was the FBI's most-wanted hacker. But in his own eyes, Mitnick was simply a small-time con artist with an incredible memory [and] a knack for social engineering... This is Mitnick's account, complete with advice for how to protect yourself from similar attacks. I believe his story. -Simson Garfinkel, Wired