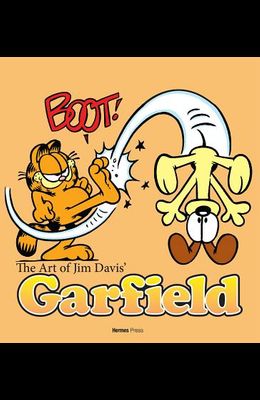 The Art of Jim Davis' Garfield

This monograph will feature original production art from the comic strip, original cels from the television show, rare production and publishing art, and more Garfield waddled onto the comics page in 1978, and the corpulent cat is still going strong today If you've ever wanted to see a behind-the-scenes look at the production art, or wanted to read more about the man behind the cat, this is your book The Art of Jim Davis' Garfield will go through the artistic process from the very beginning of the strip, to all of the media that it produces today, in details that fans have never seen before. If you love Garfield, this is definitely the book for you For new and old fans alike, this book is truly a treasure and offers a rare behind-the-scenes look at the production of the comic strip and the creation of America's favorite lasagna-loving fat cat. Featuring an original essay by noted historian R. C. Harvey, this art book will take you through the history of Jim Davis and Garfield, and how the furry feline has grown in popularity and style over the years. It discusses many of the mediums Garfield is represented in, from the Garfield and Friends television show to the live-action movies, to the current animated series, to comic books -- and beyond In the essay, Harvey interviews Davis about the history of Garfield, from inception to the modern version of this Monday-hating tabby. Davis gives the inside scoop on how Garfield's story unfolded, and how the cat was shaped into the lovable character the world knows today.