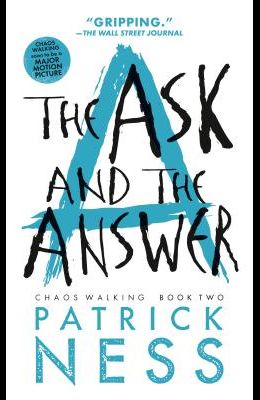 The Ask and the Answer

Book #2 in the Chaos Walking Series
by
Patrick Ness

The riveting Chaos Walking trilogy by two-time Carnegie Medalist Patrick Ness, reissued with compelling new covers--and a bonus short story in each book. Grim and beautifully written. . . . Superb. . . . This is among the best YA science fiction novels of the year. -- Publishers Weekly (starred review) Reaching the end of their flight in The Knife of Never Letting Go , Todd and Viola did not find healing and hope in Haven. They found instead their worst enemy, Mayor Prentiss, waiting to welcome them to New Prentisstown. There they are forced into separate lives: Todd to prison, and Viola to a house of healing where her wounds are treated. Soon Viola is swept into the ruthless activities of the Answer, while Todd faces impossible choices when forced to join the mayor's oppressive new regime. In alternating narratives the two struggle to reconcile their own dubious actions with their deepest beliefs. Torn by confusion and compromise, suspicion and betrayal, can their trust in each other possibly survive?