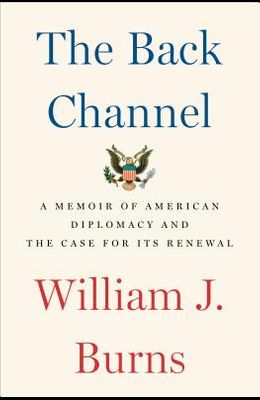 The Back Channel: A Memoir of American Diplomacy and the Case for Its Renewal

From America's secret diplomatic weapon ( The Atlantic )--a man who served five presidents and ten secretaries of state--comes an impassioned argument for the enduring value of diplomacy in an increasingly volatile world. Over the course of more than three decades as an American diplomat, William J. Burns played a central role in the most consequential diplomatic episodes of his time--from the bloodless end of the Cold War to the collapse of post-Cold War relations with Putin's Russia, from post-9/11 tumult in the Middle East to the secret nuclear talks with Iran. Burns is widely regarded as one of the most distinguished and admired American statesmen of the last half century. Upon his retirement in 2014, Secretary John Kerry said Burns belonged on a very short list of American diplomatic legends, alongside George Kennan. In The Back Channel, Burns recounts, with novelistic detail and incisive analysis, some of the seminal moments of his career. Drawing on a trove of newly declassified cables and memos, he gives readers a rare inside look at American diplomacy in action. His dispatches from war-torn Chechnya and Qaddafi's bizarre camp in the Libyan desert and his warnings of the Perfect Storm that would be unleashed by the Iraq War will reshape our understanding of history--and inform the policy debates of the future. Burns sketches the contours of effective American leadership in a world that resembles neither the zero-sum Cold War contest of his early years as a diplomat nor the unipolar moment of American primacy that followed. Ultimately, The Back Channel is an eloquent, deeply informed, and timely story of a life spent in service of American interests abroad. It is also a powerful reminder, in a time of great turmoil, of the enduring importance of diplomacy. Advance praise for The Back Channel Bill Burns is simply one of the finest U.S. diplomats of the last half century. The Back Channel demonstrates his rare and precious combination of strategic insight and policy action. It is full of riveting historical detail but also, more important, shrewd insights into how we can advance our interests and values in a world where U.S. leadership remains the linchpin of international order. --James A. Baker III Bill Burns is a stellar exemplar of the grand tradition of wise Americans who made our country the indispensable nation in this world. The Back Channel shows how diplomacy works, why it matters, and why its recent demise is so tragic. --Walter Isaacson, author of Leonardo da Vinci