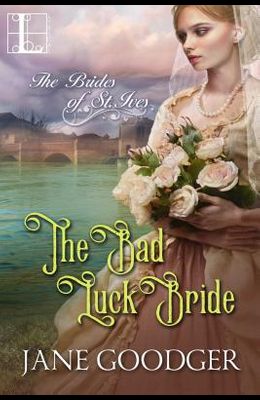 Book #1 in the The Brides of St. Ives Series
by
Jane Goodger

Goodger writes romances that touch readers' hearts and bring a smile to their day. - -RT Book Reviews The Brides of St. Ives Welcome to St. Ives, the charming seaside town where even a down-on-her luck bride might find her way back to love . . . As if being left at the alter for the third time isn't bad enough, Lady Alice Hubbard has now been dubbed The Bad Luck Bride by the London newspapers. Defeated, she returns to her family's estate in St. Ives, resolved to a future as a doting spinster. After all, a lady with her record of marital mishaps knows better than to dream of happily-ever-after. But then Alice never expects to see Henderson Southwell again. Her beloved brother's best friend disappeared from her life soon after her brother's death. Until now... Alice is just as achingly beautiful as Henderson remembers. And just as forbidden. For the notorious ladies' man made one last promise to Alice's brother before he died-and that was never to pursue her. But one glimpse of Alice's sorrow and Henderson feels a powerful urge to put the light back in her lovely eyes, one lingering kiss at a time. Even if it means falling in love with the one woman he can never call his bride . . . Praise for the novels of Jane Goodger Fun, delightfully romantic-and sexy. -Sally MacKenzie on The Spinster Bride A touching, compassionate, passion-filled romance. - RT Book Reviews on A Christmas Waltz

The Brides of St. Ives Series In Order - By Jane Goodger