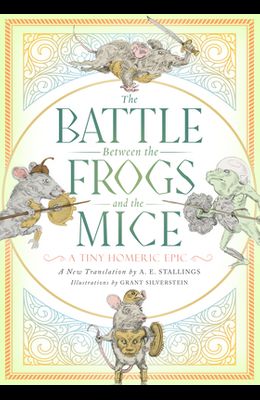 The Battle Between the Frogs and the Mice: A Tiny Homeric Epic

by
A E Stallings and Grant Silverstein

From the award-winning poet and translator Stallings comes a lively new edition of the ancient Greek fable The Battle Between the Frogs and the Mice . Originally attributed to Homer, but now thought to have been composed centuries later by an unknown author, it is the tale of a mouse named Crumbsnatcher who is killed by the careless frog King Pufferthroat, sparking a war between the two species.