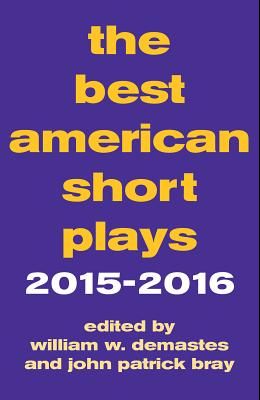 by
and William W Demastes and John Patrick Bray

Now in its seventh decade, the annals of The Best American Short Plays series now boasts hundreds of groundbreaking one-acts and an alumni list the likes of which other anthologies can only dream. From luminaries like Tennessee Williams and Edward Albee to the brightest stars of today, such as Murray Schisgal, James Armstrong, Billy Aronson, Jules Tasca, Neil LaBute, and Daniel Gallant, TBASP established itself as the standard bearer for its genre by presenting materials that offer a forthright annual reading of our nation's pulse. If The Best American Short Plays 2015-2016, co-edited by William Demastes and John Patrick Bray, proves as portentous as its forebears, suffice it to say that our hearts are pounding. In this volume, DeMastes and Bray have assembled a collection of plays centered on the notion of Starting Over. Following the 2016 election cycle, which turned centuries-old political mores and traditions on their heads, many Americans - especially those in the theatre community -&#255;feel as though the incoming presidential administration and congress will require our nation to start anew. The feeling that we are beginning again (for better or for worse) has crept into the consciousness of this year's crop of writers. These playwrights individually and collectively demonstrate the vitality and necessity of the theatre as a space where we can ask questions about character and identity on both personal and national scales. Although answers aren't easily forthcoming, the ensuing silences provides a vacuum of sorts - an ideal but ephemeral space where any citizen, regardless of persuasion or belief, can stop, sit, and think.