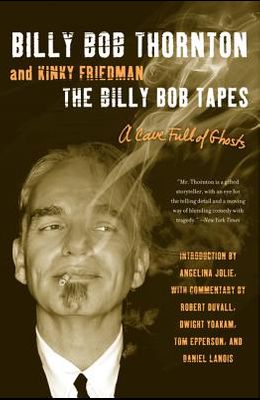 The Billy Bob Tapes: A Cave Full of Ghosts

There is--and could only ever be--one Billy Bob Thornton: actor, musician, Academy Award-winning screenwriter, and accidental Hollywood badass. In The Billy Bob Tapes , he leads us into his Cave Full of Ghosts, spinning colorful tales of his modest (to say the least) Southern upbringing, his bizarre phobias (komoda dragons?), his life, his loves (including his marriage to fellow Oscar winner Angelina Jolie), and, of course, his movie career. Best of all, he's feeding these truly incredible stories and righteous philosophical rants through his close friend, Kinky Friedman--legendary country music star, bestselling author, would-be politician, and all-around bon vivant. Put these two iconoclasts together and you get a star's story that's actually an insightful pop culture manifesto--a hybrid offspring of Born Standing Up with Sh*t My Dad Says.

From the Back Cover Billy Bob Thornton was raised in Arkansas amid a rich storytelling tradition. See, the South is just different than other places. . . . You can feel the ghosts. These stories didn't have to be made up. The characters were already there. Thus was borne his Oscar(R)-winning masterpiece Sling Blade and now The Billy Bob Tapes --based on late-night conversations with friends who gathered 'round to hear Billy mine a cave full of ghosts. Billy grew up shooting squirrels, playing drums, and dreaming of rock 'n' roll and baseball. At sixteen he met the drama teacher who first encouraged his talent. Billy recalls struggling and nearly starving in Hollywood--but also encountering compassion and wisdom from people like legendary director Billy Wilder, who advised: Write about your interesting life. The Billy Bob Tapes tells of collaboration, friendship, and loss, while reflecting on fame, culture, filmmaking, and entertainment itself. With passion, unvarnished honesty, wry humor, and a little help from friends Angelina Jolie, Robert Duvall, Dwight Yoakam, Tom Epperson, and Daniel Lanois, Billy Bob finally talks.