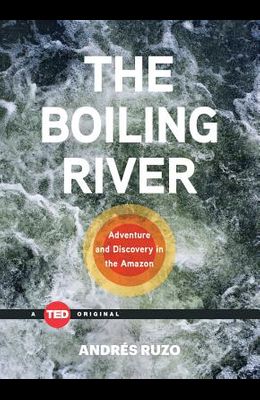 The Boiling River: Adventure and Discovery in the Amazon

In this exciting adventure mixed with amazing scientific study, a young, exuberant explorer and geoscientist journeys deep into the Amazon--where rivers boil and legends come to life. When Andr s Ruzo was just a small boy in Peru, his grandfather told him the story of a mysterious legend: There is a river, deep in the Amazon, which boils as if a fire burns below it. Twelve years later, Ruzo--now a geoscientist--hears his aunt mention that she herself had visited this strange river. Determined to discover if the boiling river is real, Ruzo sets out on a journey deep into the Amazon. What he finds astounds him: In this long, wide, and winding river, the waters run so hot that locals brew tea in them; small animals that fall in are instantly cooked. As he studies the river, Ruzo faces challenges more complex than he had ever imaged. The Boiling River follows this young explorer as he navigates a tangle of competing interests--local shamans, illegal cattle farmers and loggers, and oil companies. This true account reads like a modern-day adventure, complete with extraordinary characters, captivating plot twists, and jaw-dropping details--including stunning photographs and a never-before-published account about this incredible natural wonder. Ultimately, though, The Boiling River is about a man trying to understand the moral obligation that comes with scientific discovery --to protect a sacred site from misuse, neglect, and even from his own discovery.