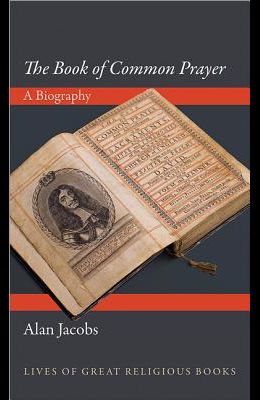 The book of Common Prayer: A Biography

How The Book of Common Prayer became one of the most influential works in the English language While many of us are familiar with such famous words as, Dearly beloved, we are gathered together here. . . or Ashes to ashes, dust to dust, we may not know that they originated with The Book of Common Prayer , which first appeared in 1549. Like the words of the King James Bible and Shakespeare, the language of this prayer book has saturated English culture and letters. Here Alan Jacobs tells its story. Jacobs shows how The Book of Common Prayer --from its beginnings as a means of social and political control in the England of Henry VIII to its worldwide presence today--became a venerable work whose cadences express the heart of religious life for many. The book's chief maker, Thomas Cranmer, Archbishop of Canterbury, created it as the authoritative manual of Christian worship throughout England. But as Jacobs recounts, the book has had a variable and dramatic career in the complicated history of English church politics, and has been the focus of celebrations, protests, and even jail terms. As time passed, new forms of the book were made to suit the many English-speaking nations: first in Scotland, then in the new United States, and eventually wherever the British Empire extended its arm. Over time, Cranmer's book was adapted for different preferences and purposes. Jacobs vividly demonstrates how one book became many--and how it has shaped the devotional lives of men and women across the globe.

From the Back Cover A beautifully lucid introduction to the origins and use of one of the most significant religious texts in the English-speaking world. Alan Jacobs helps us to understand not only the book but also the Christian sensibility of the whole Anglican tradition and the culture it nourished. --Dr. Rowan Williams, Magdalene College, University of Cambridge The Book of Common Prayer , often thought of as a source of Anglican stability, has led an interesting life of many changes. Jacobs tracks them all like a shrewd detective. --Garry Wills, author of What the Gospels Meant From pious aspiration to ruthless politics, and from bonfires of hated communion rails to the Star Wars prayer, the history of the Book of Common Prayer , in Alan Jacobs' hands, is both an education and a bright panorama. I can hardly remember another read so swift yet at the same time so helpful. --Sarah Ruden, author of Paul Among the People: The Apostle Reinterpreted and Reimagined in His Own Time Few texts have had as much influence on the language, culture, and religious life of English-speaking nations as the Book of Common Prayer . Alan Jacobs masterfully distills its history with a poetic touch that is at once scholarly, reverential, and highly engaging. There is no better introduction or guide to the Book of Common Prayer than this one. --Carlos Eire, author of A Very Brief History of Eternity Alan Jacobs traces the life of the Book of Common Prayer as it has grown and changed over its four-hundred-year history, responding to social and historical conditions and to its own inner convictions and complexities. Many books have been written about the Book of Common Prayer , but this one is uniquely compact, illuminating, and moving. --Edward Mendelson, Columbia University This book is a pleasure to read. Alan Jacobs's writing is informed, lucid, accessible, and witty. I know of no other work that is comparable. --R.W.L. Moberly, Durham University