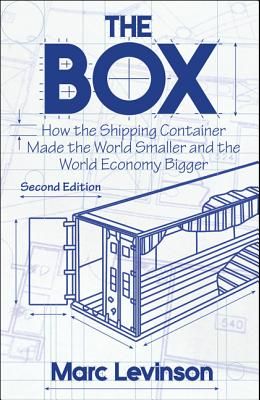 The Box: How the Shipping Container Made the World Smaller and the World Economy Bigger - Second Edition with a New Chapter by

In April 1956, a refitted oil tanker carried fifty-eight shipping containers from Newark to Houston. From that modest beginning, container shipping developed into a huge industry that made the boom in global trade possible. The Box tells the dramatic story of the container's creation, the decade of struggle before it was widely adopted, and the sweeping economic consequences of the sharp fall in transportation costs that containerization brought about. But the container didn't just happen. Its adoption required huge sums of money, both from private investors and from ports that aspired to be on the leading edge of a new technology. It required years of high-stakes bargaining with two of the titans of organized labor, Harry Bridges and Teddy Gleason, as well as delicate negotiations on standards that made it possible for almost any container to travel on any truck or train or ship. Ultimately, it took McLean's success in supplying U.S. forces in Vietnam to persuade the world of the container's potential. Drawing on previously neglected sources, economist Marc Levinson shows how the container transformed economic geography, devastating traditional ports such as New York and London and fueling the growth of previously obscure ones, such as Oakland. By making shipping so cheap that industry could locate factories far from its customers, the container paved the way for Asia to become the world's workshop and brought consumers a previously unimaginable variety of low-cost products from around the globe. Published in hardcover on the fiftieth anniversary of the first container voyage, this is the first comprehensive history of the shipping container. Now with a new chapter, The Box tells the dramatic story of how the drive and imagination of an iconoclastic entrepreneur turned containerization from an impractical idea into a phenomenon that transformed economic geography, slashed transportation costs, and made the boom in global trade possible.

From the Back Cover The continuous decline of ocean shipping costs in the last 40 years is rarely credited for the growth of global trade in contemporary literature. Don't miss this amazing history. --George Stalk, Boston Consulting Group and author of Surviving the China Riptide An excellent piece of work. --Bruce Nelson, Dartmouth College This book is dynamite. The experts who tell you the transistor and microchips changed the world are off base. The ugly, unglamorous, little-noticed shipping container has changed the world. Without it, there would be no globalization, no Wal-Mart, maybe even no high-tech. And what looks like low-tech is in fact a breathtaking technological innovation. Marc Levinson's sparkling and authoritative story is great fun to read, but it is spectacular economic history as well. --Peter L. Bernstein, author of Against the Gods: The Remarkable Story of Risk Fascinating, informative, wonderfully historicized. This is a terrific untold story. --Nelson Lichtenstein, University of California, Santa Barbara, and editor of Wal-Mart: the Face of Twenty-First Century Capitalism The adoption of the modern shipping container may be a close second to the Internet in the way it has changed our lives. It has made products from every corner of the world commonplace and accessible everywhere. It has dramatically cut the cost of transportation and thereby made outsourcing a significant issue. It has transformed the world's port cities, and more. This book, very nicely written, makes a fascinating set of true stories of an apparently mundane subject, and dramatically illustrates how simple innovations can transform our lives. --William Baumol, Director, Berkley Center for Entrepreneurial Studies, author of The Free-Market Innovation Machine In the second half of the twentieth century, an innovation came along that would transform the way the world did business. . . . I'm not talking about software. I'm talking about the shipping industry, and in particular an innovation you might not have thought much about: the shipping container. It is the subject of an excellent book I read this summer called The Box . . . . The story of this transition is fascinating and reason enough to read the book. But in subtle ways The Box also challenges commonly held views about business and the role of innovation. --Bill Gates, Gatesnotes

Books similiar to The Box: How the Shipping Container Made the World Smaller and the World Economy Bigger - Second Edition with a New Chapter by

List of All Editions of The Box: How the Shipping Container Made the World Smaller and the World Economy Bigger - Second Edition with a New Chapter by