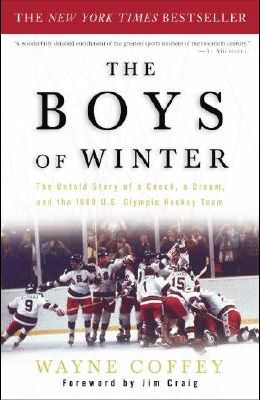 The Boys of Winter: The Untold Story of a Coach, a Dream, and the 1980 U.S. Olympic Hockey Team

The real story behind the 1980 U.S. Olympic hockey team is a legacy of hope, hard work, and homegrown triumph. Drawing on hundreds of hours of interviews, Coffey explores the untold stories of the U.S. upstarts, their Soviet opponents, and the forces that brought them together.

From the front Cover Once upon a time, they taught us to believe. They were the 1980 U.S. Olympic hockey team, a blue-collar bunch led by an unconventional coach, and they engineered perhaps the greatest sports moment of the twentieth century. Their Miracle on Ice has become a national fairy tale, but the real Cinderella story is even more remarkable. It is a legacy of hope, hard work, and homegrown triumph. It is a chronicle of everyday heroes who just wanted to play hockey happily ever after. It is still unbelievable. The Boys of Winter is an evocative account of the improbable American adventure in Lake Placid, New York. Drawing on hundreds of hours of interviews, Wayne Coffey explores the untold stories of the U.S. upstarts, their Soviet opponents, and the forces that brought them together. Plagued by the Iran hostage crisis, persistent economic woes, and the ongoing Cold War, the United States battled a pervasive sense of gloom in 1980. And then came the Olympics. Traditionally a playground for the Russian hockey juggernaut and its ever-growing collection of gold medals, an Olympic ice rink seemed an unlikely setting for a Cold War upset. The Russians were experienced professional champions, state-reared and state-supported. The Americans were mostly college kids who had their majors and their stipends and their dreams, a squad that coach Herb Brooks had molded into a team in six months. It was men vs. boys, champions vs. amateurs, communism vs. capitalism. Coffey casts a fresh eye on this seminal sports event in The Boys of Winter, crafting an intimate look at the team and giving readers an ice-level view of the boys who captivated a country. He details the unusual chemistry of theAmericans--formulated by a fiercely determined Brooks--and he seamlessly weaves portraits of the players with the fluid, fast-paced action of the 1980 game itself. Coffey also traces the paths of the players and coaches since that time, examining how the events in Lake Placid affected and directed their lives and investigating what happens after one conquers the world. But Coffey not only reveals the anatomy of an underdog, he probes the shocked disbelief of the unlikely losers and how it felt to be taken down by such an overlooked opponent. After all, the greatest American sports moment of the century was a Russian calamity, perhaps even more unimaginable in Moscow than in Minnesota or Massachusetts. Coffey deftly balances the joyous American saga with the perspective of the astonished silver medalists. Told with warmth and an uncanny eye for detail, The Boys of Winter is an intimate, perceptive portrayal of one Friday night in Lake Placid and the enduring power of the extraordinary. From the Hardcover edition.