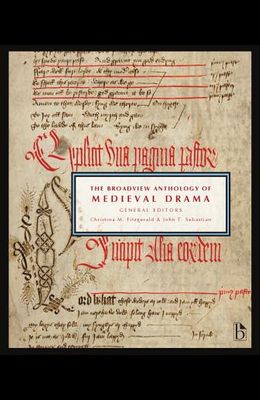 The Broadview Anthology of Medieval Drama

by
and Christina M Fitzgerald and John T Sebastian

From the Back Cover The past generation has been an extraordinarily active one in medieval drama scholarship; our appreciation of the range of medieval drama has been significantly broadened, and our understanding of certain medieval genres--most notably, biblical drama--has been fundamentally altered. The Broadview Anthology of British Literature has been widely praised for the degree to which it has taken this scholarship into account in its selection of and presentation of medieval plays. Now Broadview launches a new anthology that takes those plays as its base while expanding very substantially beyond them to represent the full range of drama in English (and, where strong connections exist, in French, Latin, Cornish, and Welsh as well) through to 1576. In all, over forty plays are included. Each work has been fully annotated and is prefaced by a substantial introduction. In many cases the language is to some extent modernized in order to make the plays more accessible to readers today.