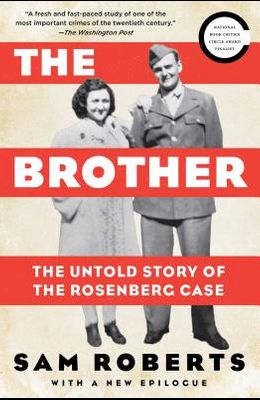 The Brother: The Untold Story of the Rosenberg Case

A fresh and fast-paced study of one of the most important crimes of the twentieth century ( The Washington Post ), The Brother now discloses new information revealed since the original publication in 2003--including an admission by his sons that Julius Rosenberg was indeed a Soviet spy and a confession to the author by the Rosenbergs' co-defendant. Sixty years after their execution in June 1953 for conspiring to steal atomic secrets, Julius and Ethel Rosenberg remain the subjects of great emotional debate and acrimony. The man whose testimony almost single-handedly convicted them was Ethel Rosenberg's own brother, David Greenglass, who recently died. Though the Rosenbergs were executed, Greenglass served a mere ten years in prison, after which, with a new name, he disappeared. But journalist Sam Roberts found Greenglass, and then managed to convince him to talk about everything that had happened. Since the original publication of The Brother , Roberts sued to release grand jury testimony, which further implicates Greenglass and demonstrates how the prosecution was tainted. One of the defendants, Morton Sobell, admitted to Roberts that he and Julius Rosenberg were spies. Furthermore, Michael and Robert Meeropol, the Rosenbergs' sons, acknowledged to Roberts that although their mother was not legally culpable, that the secret to the atomic bomb was not compromised, and that the death penalty was excessive, their father was, in fact, guilty of conspiracy to commit espionage on behalf of the Soviet Union. Now released with this important new information, The Brother is more than ever, A gripping account of the most famous espionage case in US history...an excellent book, written with flair and alive with the agony of the age ( The Wall Street Journal ).

Books similiar to The Brother: The Untold Story of the Rosenberg Case

List of All Editions of The Brother: The Untold Story of the Rosenberg Case