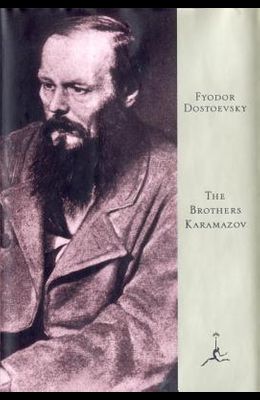 Here is Dostoevsky's epic masterpiece--a story of patricide and family rivalry embodying the disintegration of a whole society, Russia in the 1870s.

From the front Cover The Brothers Karamazov, Dostoevsky's crowning achievement, is a tale of patricide and family rivalry that embodies the moral and spiritual dissolution of an entire society (Russia in the 1870s). It created a national furor comparable only to the excitement stirred by the publication, in 1866, of Crime and Punishment. To Dostoevsky, The Brothers Karamazov captured the quintessence of Russian character in all its exaltation, compassion, and profligacy. Significantly, the book was on Tolstoy's bedside table when he died. Readers in every language have since accepted Dostoevsky's own evaluation of this work and have gone further by proclaiming it one of the few great novels of all ages and countries. The Brothers Karamazov stands as the culmination of Dostoevsky's art--his last, longest, richest, and most capacious book, said The Washington Post Book World. Nothing is outside Dostoevsky's province, observed Virginia Woolf. Out of Shakespeare there is no more exciting reading. The Modern Library has played a significant role in American cultural life for the better part of a century. The series was founded in 1917 by the publishers Boni and Liveright and eight years later acquired by Bennett Cerf and Donald Klopfer. It provided the foun-dation for their next publishing venture, Random House. The Modern Library has been a staple of the American book trade, providing readers with affordable hard-bound editions of important works of liter-ature and thought. For the Modern Library's seventy-fifth anniversary, Random House redesigned the series, restoring as its emblem the running torchbearer created by Lucian Bernhard in 1925 and refurbishing jackets, bindings, andtype, as well as inau-gurating a new program of selecting titles. The Modern Library continues to provide the world's best books, at the best prices.