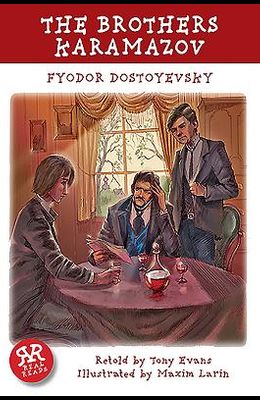 As Dimitry struck him Grigory screamed and fell back, the blood streaming horribly from his head. Dimitry bent over him, trying to stop the flow with his handkerchief which turned soaking red in an instant. Alexey, Ivan and Dimitry Karamazov were sent away by their father Fyodor when they were very young. Now the three brothers are together again but will Dimitry s bitter quarrel with Fyodor spoil their homecoming? Dimitry and his father both want to marry the beautiful Grushenka. Fyodor is old and ugly, but offers her wealth and security. Will she accept either of them, and if so, who? The sickly, timid servant Smerdyakov confesses to a terrible crime. Is he telling the truth? Can the deadly rivalry between father and son be settled peacefully, or must it end in tragedy? Real Reads are accessible texts designed to support the literacy development of primary and lower secondary age children while introducing them to the riches of our international literary heritage. Each book is a retelling of a work of great literature from one of the world s greatest cultures, fitted into a 64-page book, making classic stories, dramas and histories available to intelligent young readers as a bridge to the full texts, to language students wanting access to other cultures, and to adult readers who are unlikely ever to read the original versions.