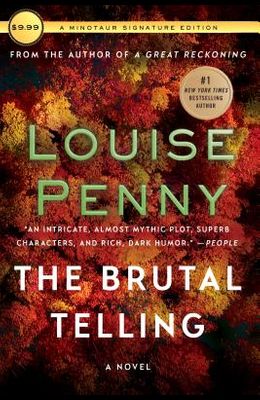 The wise and beleaguered Chief Inspector Armand Gamache returns to Three Pines The Brutal Telling , the fifth book in Louise Penny's #1 New York Times bestselling series. Chaos is coming, old son. With those words the peace of Three Pines is shattered. Everybody goes to Olivier's Bistro--including a stranger whose murdered body is found on the floor. When Chief Inspector Gamache is called to investigate, he is dismayed to discover that Olivier's story is full of holes. Why are his fingerprints all over the cabin that's uncovered deep in the wilderness, with priceless antiques and the dead man's blood? And what other secrets and layers of lies are buried in the seemingly idyllic village? Gamache follows a trail of clues and treasures--from first editions of Charlotte's Web and Jane Eyre to a spiderweb with a word mysteriously woven in it--into the woods and across the continent, before returning to Three Pines to confront the truth and the final, brutal telling.