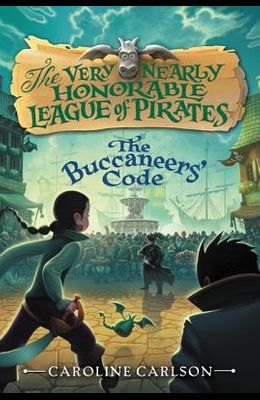 Book #3 in the The Very Nearly Honorable League of Pirates Series
by
Caroline Carlson
$3.88
Select Format

Humor, magic, and adventure abound in the third and final book of the Very Nearly Honorable League of Pirates series. Hilary Westfield is now a freelance pirate. After trying to prove herself to the VNHLP, she realized many members of the League weren t all that honorable not even very nearly. With Captain Blacktooth in cahoots with the Mutineers, the kingdom of Augusta and all its magic are at risk. What the League needs is a very honorable pirate to be their new president. So Hilary with the help of her friends, including the always spirited gargoyle challenges Blacktooth to a High Seas battle. Winner takes all. Loser, at best, will be exiled. Caroline Carlson has created a world where magic is currency, pirates are more charming than alarming, and a girl can choose a life as a pirate instead of a life in petticoats. And she once again delivers a story of high stakes, High Seas, and High Society in the hilarious and charming conclusion to the Very Nearly Honorable League of Pirates series.

From the Back Cover You, Hilary Westfield, are the most passionate pirate I know. I bet you've dreamed of leading the VNHLP dozens of times. Hilary Westfield is a freelance pirate now. When Captain Blacktooth showed his entirely dishonorable side by teaming up with the Mutineers and threatening the kingdom, Hilary forfeited her sword and hoped that the Very Nearly Honorable League of Pirates would one day secure a new leader an honorable one. (Or very nearly.) Hilary's devoted crew including the talking gargoyle believes she's the perfect person for the job, so she picks up her sword again and challenges Captain Blacktooth and his villainous friends to a High Seas battle. If she wins, Hilary will become the new president of the League. If she loses? She'll perish or, at best, she'll be forced to spend the rest of her days at the Pestilent Home for Foul-Tempered Pirates while the Mutineers steal all the kingdom's magic. To gather supporters, Hilary and her crew set sail on a quest that may or may not involve fearsome pirates, even more fearsome finishing-school girls, and . . . chickens. Caroline Carlson returns once again to the world of the Very Nearly Honorable League of Pirates in the conclusion to this fantastically funny and adventure-filled series.

Books similiar to The Buccaneers' Code