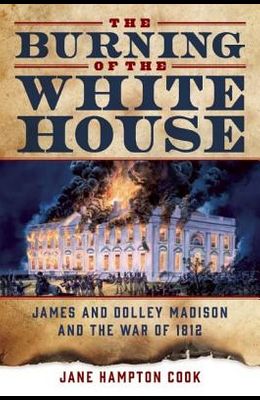 The Burning of the White House: James and Dolley Madison and the War of 1812

It's unimaginable today, even for a generation that saw the Twin Towers fall and the Pentagon attacked. It's unimaginable because in 1814 enemies didn't fly overhead, they marched through the streets; and for 26 hours in August, the British enemy marched through Washington, D.C. and set fire to government buildings, including the U.S. Capitol and the White House. Relying on first-hand accounts, historian Jane Hampton Cook weaves together several different narratives to create a vivid, multidimensional account of the burning of Washington, including the escalation that led to it and the immediate aftermath. From James and Dolley Madison to the British admiral who ordered the White House set aflame, historical figures are brought to life through their experience of this unprecedented attack. The Burning of the White House is the story of a city invaded, a presidential family displaced, a nation humbled, and an American spirit that somehow remained unbroken.

From the front Cover The White House in Flames In 1814, Washington was set alight by the invading British, in an outrage unequaled until the Japanese attack on Pearl Harbor in 1941. How did it happen? How did the scholarly president James Madison, the father of the Constitution, react? And how did his socialite wife, Dolley Madison, respond to the invasion of the redcoats? Here, in The Burning of the White House , award-winning author Jane Hampton Cook brings this exciting story to life--from the intrigue of disloyal cabinet members, to the pacifist Quaker faith of the lively and defiant Dolley Madison, to adventures involving future president James Monroe, amateur poet Francis Scott Key, and The Legend of Sleepy Hollow author Washington Irving. The Burning of the White House gives you a front row seat at one of the most dramatic, contentious, and dangerous times in American history, with New England threatening secession (fifty years before the South seceded, precipitating the Civil War), British Rear Admiral George Cockburn plotting his attack on the newly independent nation's young capital, and President Madison's opponents criticizing him for being weak and ineffectual before Madison, in the end, emerged victorious. Colorful, informative, and a tremendous read, The Burning of the White House is a riveting account of the first great war in America's post-independence history, sure to merit a place on any history lover's bookshelf.

Books similiar to The Burning of the White House: James and Dolley Madison and the War of 1812

List of All Editions of The Burning of the White House: James and Dolley Madison and the War of 1812