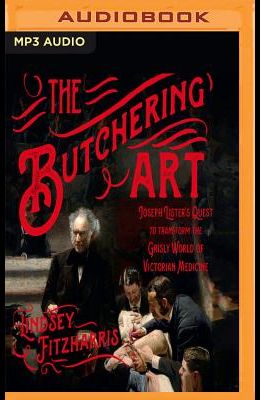 by
Lindsey Fitzharris and Ralph Lister

The gripping story of how Joseph Lister's antiseptic method changed medicine forever In The Butchering Art , the historian Lindsey Fitzharris reveals the shocking world of 19th-century surgery on the eve of profound transformation. She conjures up early operating theaters - no place for the squeamish - and surgeons, working before anesthesia, who were lauded for their speed and brute strength. These medical pioneers knew that the aftermath of surgery was often more dangerous than their patients' afflictions, and they were baffled by the persistent infections that kept mortality rates stubbornly high. At a time when surgery couldn't have been more hazardous, an unlikely figure stepped forward: a young, melancholy Quaker surgeon named Joseph Lister, who would solve the deadly riddle and change the course of history. Fitzharris dramatically recounts Lister's discoveries in gripping detail, culminating in his audacious claim that germs were the source of all infection - and could be countered by antiseptics. Focusing on the tumultuous period from 1850 to 1875, she introduces us to Lister and his contemporaries - some of them brilliant, some outright criminal - and takes us through the grimy medical schools and dreary hospitals where they learned their art, the deadhouses where they studied anatomy, and the graveyards they occasionally ransacked for cadavers. Eerie and illuminating, The Butchering Art celebrates the triumph of a visionary surgeon whose quest to unite science and medicine delivered us into the modern world.