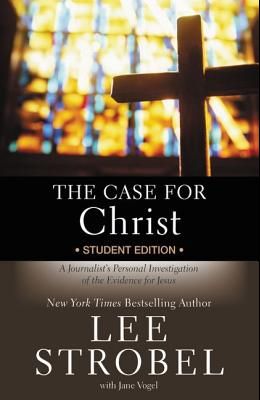 The Case for Christ Student Edition: A Journalist's Personal Investigation of the Evidence for Jesus (Case for ... Series for Students)

Is Jesus really the Son of God, the Messiah? Lee Strobel wasn't so sure. So he decided to use his award-winning journalistic skills to investigate Jesus and prove once and for all if all the claims about him are true. The Case for Christ Student Edition adapts Strobel's New York Times bestselling book to present hard-hitting findings as well as Lee's journey from skepticism to belief in an easy-to-follow manner so you can make a decision about Jesus for yourself. There's historical proof a guy named Jesus walked on the earth ... but was he really performing miracles? Did he actually rise from the dead? And was he truly the prophesied savior he claimed to be? Lee Strobel found it all hard to believe, and his doubts led him to ask the tough questions and dig into the real evidence to see if the Bible's claims and Jesus's words were true. Inside this book is the scientific data, expert testimonies and interviews, cross-religious comparisons, historical and archeological proofs he discovered during his investigation, and the conclusion he finally came to about Christianity that changed his life forever. All the facts and the answers to important questions are in--what will your verdict be? The Case for Christ Student Edition Presents the arguments for and against Christianity teens and young adults thirteen and up often ask and encounter so they can see the real facts Uses logic and solid information to examine why Christians believe what they do Can also be used in the classroom, in group studies, or as part of a religious studies or comparison class Contains infographics and charts to make the facts clear Pairs well with The Case for a Creator Student Edition , The Case for Faith Student Edition , The Case for the Real Jesus Student Edition , and The Case for Miracles Student Edition

Cases for Christianity Series In Order - By Lee Strobel