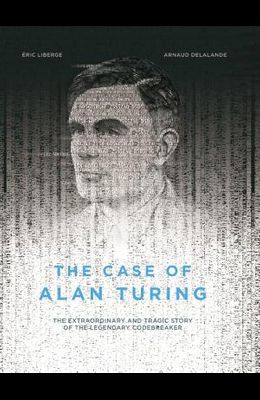 The Case of Alan Turing: The Extraordinary and Tragic Story of the Legendary Codebreaker

by
Eric Liberge and Arnaud Delalande and David Homel

Alan Turing, subject of the Oscar-winning 2014 film The Imitation Game , was the brilliant mathematician solicited by the British government to help decipher messages sent by Germany's Enigma machines during World War II. The work of Turing and his colleagues at Hut 8 created what became known as the bombe which descrambled the German navy's messages and saved countless lives and millions in British goods and merchandise. Despite his heroics, however, Turing led a secret life as a homosexual. After a young man with whom he was involved stole money from him, he went to the police, where he confessed his homosexuality; he was charged with gross indecency, and only avoided prison after agreeing to undergo chemical castration. Tragically, he committed suicide two years later. Authors Liberge and Delalande used once-classified information only available in 2012 to create a biography that is scientifically rigorous yet understandable for the lay reader. It's also a meticulous depiction of World War II, and an intimate portrayal of a gay man living in an intolerant world. Delving deeper into Turing's life than The Imitation Game , this graphic novel is a fascinating portrait of this brilliant, complicated, and troubled man. Eric Liberge has authored or co-authored over thirty graphic novels in his native France, including books on Versailles and World War II. Arnaud Delalande is the author of nine novels as well as numerous graphic novels in France, including Le Piege de Dante (Dante's Trap) , translated into twenty languages.