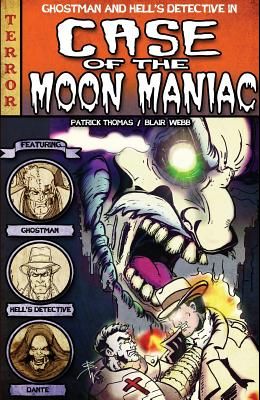 The Case of the Moon Maniac

by
Patrick Thomas and Blair Webb

When he was alive, Albert Fish was known as the Werewolf of Wysteria, the Brooklyn Vampire, the Boogey Man and the Moon Maniac. A rapist and cannibal with over 100 claimed victims, he was eventually sent to the electric chair and his soul claimed by Hell. Ghostman, half lost soul, half fallen angel, all monster, was created to banish the very terror he unleashed from Hell itself. It is because of him that Fish is loose again in the mortal world. Negral, a forgotten Sumerian god, has taken the thankless job of being Hell's Chief of Police. Hell's Detective wants the serial killer back in the Pit before he can take any more innocent lives. Unfortunately, that means getting Ghostman's help. Can these two manage to work together long enough to put a killer back in Hell? THE COLOSSAL TEAM-UP COLLECTED AT LAST The Case of the Moon Maniac is literally the team-up from Hell. Pat Thomas's Negral and Blair Webb's Ghostman are the perfect pair to track down a should-be-dead serial killer. Laughs, action, and some really weird stuff await you in this book. --John L. French, Author of the Bianca Jones supernatural investigation stories.