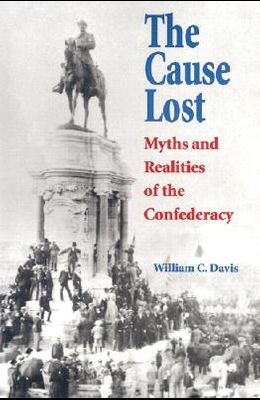 The Cause Lost: Myths and Realities of the Confederacy

For nearly a quarter of a century, Pulitzer Prize nominee William C. Davis has been one of our best writers on the Civil War. His books including Breckinridge: Statesman, Soldier, Symbol; Jefferson Davis: The Man and His Hour; and A Government of Our Own The Making of the Confederacy have garnered numerous awards and enlightened and entertained an avid readership. The Cause Lost extends that tradition of excellence with provocative new insights into the myths and realities of an endlessly fascinating subject.

From the Back Cover In these pages, Davis brings into sharp focus the facts and fictions of the South's victories and defeats, its tenacious struggle to legitimize its cause and defeat an overpowering enemy, and its ultimate loss of will. He debunks long-standing legends, offers irrefutable evidence explaining Confederate actions, and contemplates the idealism, naivete, folly, and courage of the military leadership and would-be founding fathers. Among the most misunderstood, Davis contends, was Jefferson Davis. Often branded as enigmatic and incompetent, the Confederate president was simply a decent and committed leader whose mistakes were magnified by the war's extraordinary demands. Davis scrutinizes Jefferson Davis' relationship with his generals - most of whom were unproved talents or cronies with proven deficiencies - and reveals why only Robert E. Lee succeeded in winning Davis' confidence through flattery, persuasion, and a sense of responsibility. He also examines the myths and memories of the nearly deified Stonewall Jackson and of John C. Breckinridge, the only effective Confederate secretary of war. Davis also illustrates why the cause of the war - a subject of long-standing controversy - boils down to the single issue of slavery; why Southerners, 90 percent of whom didn't own slaves, were willing to join in the battle to defend their homeland; how the personalities, tactics, and styles of the armies in the turbulent West differed greatly from those in the East; what real or perceived turning points influenced Southern decision making; and how mythology and misinterpretations have been perpetuated through biography, history, literature, and film.