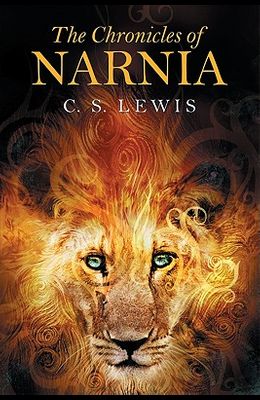 The Chronicles of Narnia: 7 Books in 1 Paperback

Four children travel to a world in which they are far more than mere children and everything is far more than it seems. Richly told, and perfectly realized in detail of world and pacing of plot, the story is infused with the timeless issues of good and evil, faith and hope.

From the Back Cover Journeys to the end of the world, fantastic creatures, and epic battles between good and evil -- what more could any reader ask for in one book? The book that has it all is The Lion, the Witch and the Wardrobe , written in 1949 by Clive Staples Lewis. But Lewis did not stop there. Six more books followed, and together they became known as The Chronicles of Narnia. For the past fifty years, The Chronicles of Narnia have transcended the fantasy genre to become part of the canon of classic literature. Each of the seven books is a masterpiece, drawing the reader into a land where magic meets reality, and the result is a fictional world whose scope has fascinated generations. This edition presents all seven books -- unabridged -- in one impressive volume. The books are presented here according to Lewis' preferred order, each chapter graced with an illustration by the original artist, Pauline Baynes. Deceptively simple and direct, The Chronicles of Narnia continue to captivate fans with adventures, characters, and truths that speak to readers of all ages, even fifty years after they were first published.