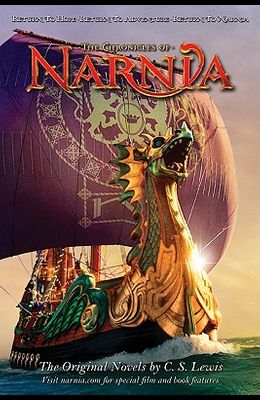 The Chronicles of Narnia Movie Tie-In Edition: 7 Books in 1 Paperback

Celebrate The Voyage of the Dawn Treader feature film by reading all seven books in one impressive movie tie-in volume! Illustrations.

From the Back Cover Journeys to the end of the world, fantastic creatures and epic battles between good and evil--the book that has it all is the lion, the witch and the wardrobe, written in 1949 by C. S. Lewis. But Lewis did not stop there. Six more books followed, and together they became known as The Chronicles of Narnia . For over fifty years, The Chronicles of Narnia have transcended the fantasy genre to become part of the canon of classic literature. Each of the seven books is a masterpiece, drawing the reader into a land where magic meets reality, and the result is a fictional world whose scope has fascinated generations. This edition presents all seven books--unabridged--in one impressive volume.