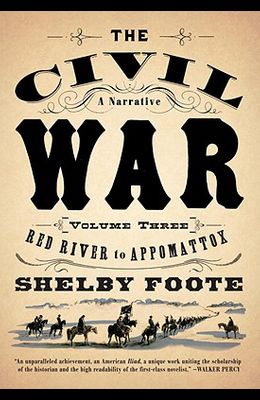 Book #3 in the The Civil War Series
by
Shelby Foote

This final volume of Shelby Foote's masterful narrative history of the Civil War brings to life the military endgame, the surrender at Appomattox, and the tragic d nouement of the war--the assassination of President Lincoln. Features maps throughout. An unparalleled achievement, an American Iliad , a unique work uniting the scholarship of the historian and the high readability of the first-class novelist. --Walker Percy To read this chronicle is an awesome and moving experience. History and literature are rarely so thoroughly combined as here; one finishes this volume convinced that no one need undertake this particular enterprise again. --Newsweek In objectivity, in range, in mastery of detail, in beauty of language and feeling for the people involved, this work surpasses anything else on the subject. . . . Written in the tradition of the great historian-artists--Gibbon, Prescott, Napier, Freeman--it stands alongside the work of the best of them. --The New Republic The most written-about war in history has, with this completion of Shelby Foote's trilogy, been given the epic treatment it deserves. --Providence Journal

From the Back Cover Already recognized as one of the finest histories ever fashioned by an American, this is a narrative of over a million and a half words which recreates on a vast and brilliant canvas the events and personalities of an American epic: The Civil War.
From the front Cover I have never read a better, more vivid, more understandable account of the savage battling between Grant's and Lee's armies.... Foote stays with the human strife and suffering, and unlike most Southern commentators, he does not take sides. In objectivity, in range, in mastery of detail in beauty of language and feeling for the people involved, this work surpasses anything else on the subject.... It stands alongside the work of the best of them.--New Republic

The Civil War Series In Order - By Shelby Foote