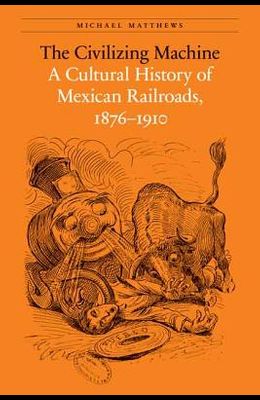 The Civilizing Machine: A Cultural History of Mexican Railroads, 1876-1910

Part of the The Mexican Experience Series
by
Michael Matthews

In late nineteenth-century Mexico the Mexican populace was fascinated with the country's booming railroad network. Newspapers and periodicals were filled with art, poetry, literature, and social commentaries exploring the symbolic power of the railroad. As a symbol of economic, political, and industrial modernization, the locomotive served to demarcate a nation's status in the world. However, the dangers of locomotive travel, complicated by the fact that Mexico's railroads were foreign owned and operated, meant that the railroad could also symbolize disorder, death, and foreign domination. In The Civilizing Machine Michael Matthews explores the ideological and cultural milieu that shaped the Mexican people's understanding of technology. Intrinsically tied to the Porfiriato, the thirty-five-year dictatorship of Gen. Porfirio D az, the booming railroad network represented material progress in a country seeking its place in the modern world. Matthews discloses how the railroad's development represented the crowning achievement of the regime and the material incarnation of its mantra, order and progress. The Porfirian administration evoked the railroad in legitimizing and justifying its own reign, while political opponents employed the same rhetorical themes embodied by the railroads to challenge the manner in which that regime achieved economic development and modernization. As Matthews illustrates, the multiple symbols of the locomotive reflected deepening social divisions and foreshadowed the conflicts that eventually brought about the Mexican Revolution. Michael Matthews is an assistant professor of history at Elon University.

The Mexican Experience Series In Order - By Michael Matthews