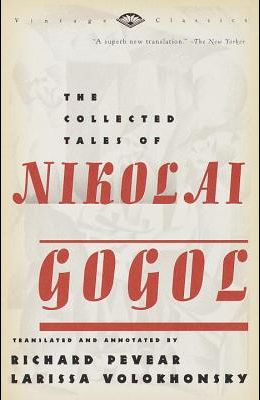 The Collected Tales of Nikolai Gogol

When Pushkin first read some of the stories in this collection, he declared himself amazed. Here is real gaiety, he wrote, honest, unconstrained, without mincing, without primness. And in places what poetry . . . I still haven't recovered. More than a century and a half later, Nikolai Gogol's stories continue to delight readers the world over. Now a stunning new translation--from an award-winning team of translators--presents these stories in all their inventive, exuberant glory to English-speaking readers. For the first time, the best of Gogol's short fiction is brought together in a single volume: from the colorful Ukrainian tales that led some critics to call him the Russian Dickens to the Petersburg stories, with their black humor and wonderfully demented attitude toward the powers that be. All of Gogol's most memorable creations are here: the minor official who misplaces his nose, the downtrodden clerk whose life is changed by the acquisition of a splendid new overcoat, the wily madman who becomes convinced that a dog can tell him everything he needs to know. These fantastic, comic, utterly Russian characters have dazzled generations of readers and had a profound influence on writers such as Dostoevsky and Nabokov. Now they are brilliantly rendered in the first new translation in twenty-five years--one that is destined to become the definitive edition of Gogol's most important stories.