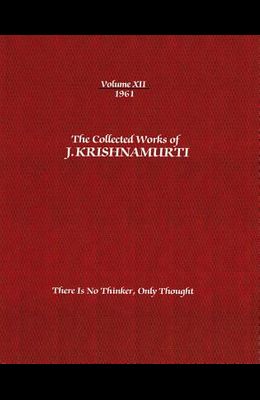 The Collected Works of J. Krishnamurti, Volume XII, 1961: There Is No Thinker, Only Thought

In these talks given in New Delhi, Bombay, London, Saanen, Paris and Madras, Krishnamurti begins by defining what he means by the word discussion and what it means to go beyond thought. I think, before we begin, it should be made clear what we mean by discussion. To me it is a process of discovery through exposing oneself to the fact. That is, in discussing I discover myself, the habit of my thought, the way I proceed to think, my reactions, the way I reason, not only intellectually but inwardly. It is really exposing oneself not merely verbally but actually so that the discussion becomes a thing worth while - to discover for ourselves how we think. Because, I feel if we could be serious enough for an hour or a little more and really fathom and delve into ourselves as much as we can, we shall be able to release, not through any action of will, a certain sense of energy which is all the time awake, which is beyond thought.