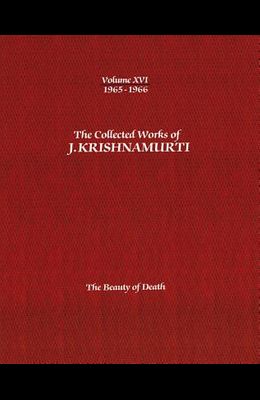 The Collected Works of J.Krishnamurti -Volume XVI 1965-1966: The Beauty of Death

Only in peace can a human being flower in goodness - not in war, not in violence, not in disorder, but only when there is a deep abiding peace. And to understand this whole phenomenon of hate, destruction and disorder, one has to enquire not merely intellectually - because such an enquiry is futile, worthless and has no meaning whatsoever - but actually what order means, what violence means, and the significance of peace; one has to enquire non-verbally, non-intellectually - intellectual inquiry] really has very little meaning, because most of us have read or indulged in theory what peace should be, how to get rid of violence, and how to establish order.. Krishnamurti gave these talks in India and Europe. The talks span the whole of human existence, exploring what it means to live rightly in a world full of confusion and misery.