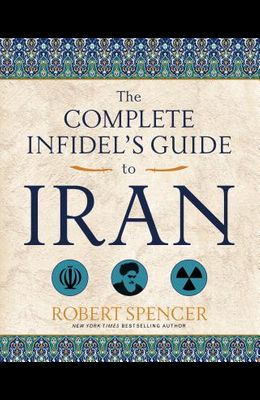 The Complete Infidel's Guide to Iran

From the front Cover Our Most Dangerous Enemy Think it's ISIS? Think again. Iran is the terrorist powerhouse of the world--made all the more dangerous by the disastrous nuclear deal that restricts Iran's nuclear ambitions hardly at all. The Iranian government is an open enemy of the United States--and of anyone who dissents from Shia Islam. Iran confronts U.S. Navy ships in the Persian Gulf on a near daily basis. It executes more of its citizens than any other nation. It is a country torn by hypocrisy--lectured by mullahs, and with brutally enforced Islamic religious laws, but rife with alcoholism. Once America's ally, Iran now claims leadership of the global jihad, and the ayatollahs' aim is nothing less than world conquest for Islam. In his extraordinary new book, The Complete Infidel's Guide to Iran , New York Times bestselling author Robert Spencer reveals: How the Iranian nuclear deal is sheer capitulation to the mullahs, allowing Iran to inspect its own facilities and pursue nuclear weapons Iran's long-standing support for terrorists--including shocking evidence that Iran helped plan the 9/11 attacks Why Iran wants nuclear weapons--clue: it's not about deterrence American diplomatic folly--why the Obama administration has grossly underestimated the Iranian threat A new grand strategy: how Iran's Shi'ite terrorism might be contained and its threat to the United States reduced The Islamic Republic is already at war with America. If we refuse to recognize that fact, we are only falling prey to the mullahs' campaign of duplicity. The Complete Infidel's Guide to Iran exposes the true nature of the threat, lays out what America must do to defeat it, and gives you all the information you need about America's least understood yet potentially most lethal foe.

List of All Editions of The Complete Infidel's Guide to Iran