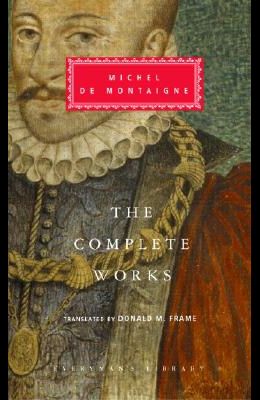 The great themes of existence are explored in the only single-volume edition of the complete works--essays, letters, and travel journals--of Michel de Montaigne, the father, and unsurpassed practitioner, of the essay. Ribbon marker.

From the front Cover Humanist, skeptic, acute observer of himself and others, Michel de Montaigne (1533-92) was the first to use the term essay to refer to the form he pioneered and he has remained one of its most famous practitioners. He reflected on the great themes of existence in his masterly and engaging writings, his subjects ranging from proper conversation and good reading, to the raising of children and the endurance of pain, from solitude, destiny, time and custom, to truth, consciousness, and death. Having stood the test of time, his essays continue to influence writers nearly five hundred years later. Also included in this complete edition of his works are Montaigne's letters and travel journal, fascinating records of the experiences and contemplations that would shape and infuse his essays. Montaigne speaks to us always in a personal voice in which his virtues of tolerance, moderation, and understanding are dazzlingly manifest. Donald M. Frame's masterful translation is widely acknowledged to be the classic English version.